“Are You Sure You’re Pissed Off at the Right People?” 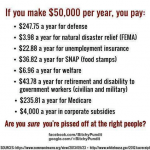 I’ve been seeing this picture crop up on social networking sites every so often. It lists a number of government expenditures relative to the tax on $50,000 worth of income. From the top of the list are itemized selected expenses in the $2-$250 range, most of which have, at one time or another, been the target of debates regarding cuts in government spending. The list finishes with “corporate handouts,” standing out at a whopping $4000. At the bottom, the question is posed: “are you sure you’re pissed off at the right people?”

This, I presume, was created to feed into an “eat-the-rich” sentiment among its readers. It’s the kind of thing that appeals to people’s cognitive biases, that they won’t take the time to consider too deeply because it is already convenient to believe such things. The numbers presented in the meme seem wrong to me, and easily misrepresented, but I need not waste the time to fact-check them. Whether the numbers are completely accurate or completely fabricated, it may surprise you as I explain that it’s irrelevant; that is because the premise of this meme is flawed to begin with.

The fact is that I don’t “pay” for any of that. No one does. The word “pay” suggests some kind of voluntary agreement. It is more accurate to say that the money is taken from me. Yes, I mail in my check to the IRS when they tell me, but not because I want to. If I don’t pay, they will demand yet more, my possessions and home taken, and I, thrown in a cage. If I resist too much, I’ll be beaten or put down by the same people I’m supposedly “paying” to defend me from thieves, kidnappers, and thugs. If we weren’t so in denial, calling it government, we’d call it a protection racket, because that’s exactly what it is.

Words like “theft” and “exploitation” often get thrown around, normally directed at everyone except those who are wielding the physical threats and doing the actual stealing. Corporations have no such power, independently. Unlike with the government, nobody believes it’s okay for Amazon.com to bill for items you haven’t ordered, and send their armed men to throw you in their prisons you if you don’t pay. If you don’t shop at Walmart, the greeter isn’t going to come to your house and shake you down. If you don’t “pay” your taxes, the police will.

It’s a strange phenomenon, that so many of us are willing to ignore the direct and obvious perpetrator of this extortion, and defer the entirety of the blame to secondary influences. If the extortion was only happening to a few of our immediate peers, it would be obvious. But, since we are all burdened by taxes, and because a portion of the money is promised for our benefit, we have allowed ourselves the delusion that what we would otherwise call extortion is somehow moral, or even righteous. For many, it is taboo to even question the legitimacy of taxes, to entertain the idea that what taxes pay for can exist in their absence. It has become something like a communal Stockholm syndrome; we must pay all that is demanded of us, regardless of how the government (ab)uses the money, and those who do not pay are, by some magnificent twist of logic, stealing from everyone else and deserve whatever comes to them.

I’ve written before about how it is in the best interests of both major parties to keep people in a state of antagonistic partisanship, to let them bicker over seemingly important issues in order to distract them from more fundamental ones. Whether intended or not, this meme is just such a distraction, that we argue endlessly over how the extorted funds will be used to further competing interests, rather than whether the extortion should exist at all.

That said, the point of the meme is still somewhat valid. I trust that most of us, left right and independent alike, will agree that corporate interests have burdened the American economy through unwarranted influence over government policy. My argument is not so much with the problem, but with that of oft-suggested solutions.

Imagine, if you will, a string of homicides. It turns out that a wealthy patron has enlisted the services of a criminal syndicate in order to eliminate his competition and secure his business interests. Imagine, then, how absurd it would be if someone suggested that, in order to solve this problem, the people should provide the criminals with more weaponry; the logic being that with more firepower, they might better resist the influence of the aforementioned patron. No question is given as to whether or not the criminal syndicate should exist in the first place, and clearly, the proposed solution would only exacerbate the problem.

If you can imagine this, then you can similarly understand my incredulity at suggestions that the solution to corporate influence is to pass more regulations. The government is not your savior. The government is their tool. Corporations with huge profit margins can afford to deal with minimum wage hikes, complicated and expensive regulation compliance, and new taxes. The mom-and-pop stores can’t. Further, even as regulations are passed to placate the people, the more powerful corporations will wield their political influence as actively as ever to make sure the details are worded in their favor, with exceptions for themselves and conditions against their competitors. In fact, the very existence of the corporation, itself, is a decree of government regulation; from the beginning, a handshake between rulers and politically-connected elite, one step short of state socialism. To empower one is to empower the other.

If you hate corporate influence over government, if your goal is to combat corruption and exploitation, if you wish to oppose big business and give a chance to “the little guy”, and you do this by campaigning for laws or taxes to be passed, then you are, in fact, sabotaging your own cause. It is no coincidence that, in the real world, the non-hypothetical one that we’re living in right now, such measures have been a losing battle for as long as they have been tried; all along, you have been fighting to further the objectives of your enemy.

If we truly wish to solve these issues, then the first step must be to correctly identify the problem, or else efforts to remedy the situation will be ineffective at best. We must stop deferring responsibility for the violence away from those who commit it. And, upon identifying the perpetrator of said violence, we must stop defending it, justifying it, feeding it, and we must commit to rejecting the initiation of violence altogether. It is also important that we recognize when something that one finds distasteful is not violent, such that we do not seek to respond to it by sanctioning yet more government violence.

As to the question posed by the meme, I answer: I really don’t care what mobsters do with my money; once it is is taken from me, it is out of my hands, and I no longer have any meaningful input into how it is used. If I am to have a say, then I say that I wish to not be extorted in the first place. Then, if someone thinks any service or cause is worth my money, we can decide through peaceful and voluntarily negotiation if and how much I’ll invest. Until then, I’m very sure that my discontent is directed squarely where it belongs.