Arizona: Yes, you are.

Arizona’s State Bill 1062 has stirred up some controversy. The gist of the bill is that business owners will be able to refuse service to customers on the basis of religion without fear of lawsuit. Religion, being a highly subjective thing (in the view of a non-religious person like myself), means refusal for virtually any reason at all. In particular, critics of this bill respond to the intent of some business owners to refuse service based on sexual orientation. Some particularly passionate individual created the image shown here, message atop the Arizona flag, presumably to inform the general public that not all Arizonans support this bill.

I voted in favor of gay marriage in my state. It’s a matter of principle. People should be able to do as they please with their own person and property, as long as they aren’t committing violence, fraud, or theft against the person or property of others. If someone is anti-gay, people have the right to think as they please, but it’s not okay to use violence to threaten others into behaving as one thinks that they should.

In this case, that violence in question would be the consequences of not following an anti-gay-marriage law: pay fines, or else go to jail, or if you resist arrest then physical violence will be used to force compliance. Because we understand the chain of consequences, and we know we can’t win a physical confrontation with the government, most of us would just rather follow the law even if we don’t agree with it, and if we mess up we pay the fine. The threat of violence is enough to elicit our acquiescence.

Now, this is arguably fine when it comes to protecting people from each other – for example, laws against theft, murder, rape, fraud, and the like. However, anti-gay legislation is exactly the opposite: using the threat of violence to intrude into the non-violent decisions that people make about their own lives and property. Peaceful, voluntary association should not be hindered in any way.

If SB1062 were introduced in my state, I would support it. It’s a matter of principle. People should be able to do as they please with their own person and property, as long as they aren’t committing violence, fraud, or theft against the person or property of others. If someone is pro-gay, people have the right to think as they please, but it’s not okay to use violence to threaten others into behaving as one thinks that they should.

The threat of legal violence is arguably fine when it comes to protecting people from each other. However, legislation to mandate the accommodation of gays is exactly the opposite: using the threat of violence to intrude into the non-violent decisions that people make about their own lives and property. Peaceful, voluntary disassociation should not be hindered in any way.

A bit shocking, no? Principle is a double-edged sword. It cannot be wielded against others and then casually disregarded when it is inconvenient to one’s own agenda.

What must be understood is that, if you are pro-gay, voluntary disassociation is not a threat. It is a tool. It is in fact one of the most effective tools that the people have to enact non-violent social change.

In response to the proposal of SB1062, many Arizonans have replied, “We’re not all dicks.” In fact, that most Arizonans are tolerant of homosexuality. I believe it’s absolutely true. And that is exactly why it is not necessary to use the threat of legal violence to enforce “tolerance”.

The current economy of the U.S. is a far cry from being a free market, in which non-violent  and voluntary interaction is the universal standard. It can barely even be called capitalism at this point. However, market forces function no matter the legal environment, and the U.S. is still capitalist enough that most consumer-level businesses still rely on repeated voluntary patronage to be successful.

So, lets say that SB1062 passes. Let’s say that neo-liberal fears come true, and some business owners start refusing service to people based on sexual orientation. Let us be pessimistic and say that only 40% of Arizonans believe in tolerance towards homosexuals. Let us say that these tolerant people are also ethically consistent, and do not support the use of violence, legal or otherwise, to force their views upon others. What do they do?

If there exists a discriminatory business owner, and the conscientious 40% boycott him and support his more tolerant competition, he will not remain successful much longer. Even if he has no competition, it will be easy for any one of those tolerant people to start a competing business and hold at least 40% of the market in short order. The other 60%, some of them may share the views of the discriminatory business owner and support him exclusively, but most really won’t care either way and patron both establishments according to their own convenience. 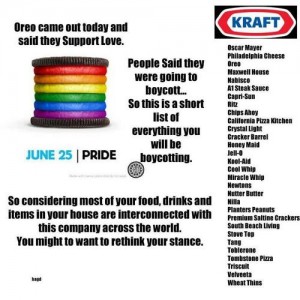 Thus, in a population where there exists a greater number of those who tolerate homosexuality than those who oppose it (as seems to be the case, or else democracy isn’t going to help you anyway), those businesses which disregard general public sentiment will find themselves at an economic disadvantage. As tolerance leads to social and economic success, people will find themselves becoming more tolerant, and in turn tolerant organizations will gain even greater market and social share. Ultimately, intolerant organizations (if they don’t change) will find that they only serve a small, dwindling number of adamantly intolerant individuals which will likely die out within a generation. For a business, an anti-gay sign is like a suicide note.

Thus, the goal of tolerance towards homosexuality is achieved, in an ethically consistent manner, without the need for violence, without giving further excuse or precedent to those in power to violently intrude into your own life, on behalf of someone who has some personal objection to your own nonviolent and voluntary activities.

It’s fine if one values tolerance. I do too. It’s also fine that some go out of their way to prove to their friends how tolerant they are – I think that’s rather pretentious, but to each his own. But one should try, at least, not to be so “open-minded” that one’s brains fall out. Ethical consistency is important for the longevity of one’s ideals. When “tolerance” is expressed through violence – even indirectly through the use of government – it sort of defeats the purpose. That’s not a trade worth making. Pro-gay Arizonans: don’t be dicks.