Using a Variable Power Riflescope as a Field-Expedient Rangefinder

Do you plan a trip to the field? Need to be able to range targets, but don’t want to carry specialized rangefinding equipment? Such questions get asked often around the internet, but most people say it can’t be done without a mil-dot or rangefinding scope reticle and a set of mathematical formulas – often requiring a calculator, if you want reasonable precision – to compute distances. I’m writing to tell you that there is a much simpler way, faster and with little or no math, which is just about as effective, and requires only one very common shooter’s tool that you probably already own and carry on every trip to the field.

All you need is a second focal plane (or SFP, it means that the reticle stays a constant size relative to your eye, rather than growing or shrinking with magnification power) variable power scope with some type of reticle marks (a standard duplex will serve) and an accurately-marked magnification adjustment ring. This method involves using the magnification ring like a simple slide-rule – those mechanical cheat sheets that scientists once used to get serviceable figures without engaging in intensive math, before general availability of scientific calculators rendered them obsolete. 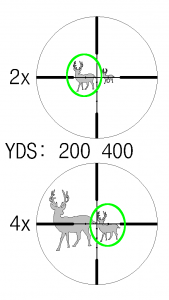 To understand how this works, you need to take a moment to visualize the way distance perception works.

Put these two mechanics together and you will happen upon a useful phenomenon – if an object is 100 yards away, and you view it at 1x, it will appear a certain size in relation to your reticle markings. If you move the target to 300 yards away, it will appear 1/3rd the size; however, if you then zoom in to 3x, the object will again appear to be the same size as a 100yd object at 1x. Thus, by using your reticle as a ruler and adjusting magnification to match, you can estimate ranges without doing any math.

This will also work if you have a scope that doesn’t go down to 1x. Say you have a 3-9 scope. All you have to do is know how your target will measure against your reticle with 3x magnification at 300 yards. This also works with meters, or any other measurement unit, as long as you use the same unit for all measurements.

At the time of the original writing of this article, I haven’t seen this particular method posted anywhere else on the web. I’ve seen similar ones that involve manually marking the magnification ring with the distances at which a target’s size correlates with the reticle, but I have not seen one like mine that correlates the magnification and distance, directly. I believe that my method can be easier to work with and more versatile if you are familiar with the measurements of your reticle when [x mag]=[x00 yards].

Thanks for reading, hope you found this information useful.