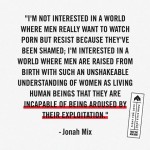 I recently noticed this image come up in my Facebook feed. To me, it is immediately apparent that there is something fundamentally wrong with the premise of this argument. However, in a brief discussion with the person who posted it, it became clear that she couldn’t see the problem, and insisted that pornography is an issue of male exploitation of women.  By the time I typed out a reply, I found that it was long enough to warrant its own article.

I spent some time thinking about why she might feel about this as she does, about the differences in perspectives that lead to opposite interpretations of the same situation. After deliberation, I may understand a little better where she is coming from, and in the spirit of philosophical charity, and to try my best to avoid straw-manning the issue, I’ll try to phrase it in the most generous way I can.

Given that Christina (not her real name) is a steadfast Republican Christian, she has developed in an environment such that she places a great deal of value on what she considers to be her sexual integrity. If a woman like Christina were to ever find herself participating in pornography, it would almost certainly be against her better judgment, if not entirely against her will. She would find it shameful and degrading, and would not consider the work to be worth any amount of pay. In her case, should she ever find herself in such a situation, it would likely be exploitation.

Now, if we take this situation and call it a case of men exploiting women, what we’re saying is that women aren’t responsible for their own actions. We have dismissed the woman’s ability to decide her own beliefs and values, to make her own choices, and to pursue her own goals. We’re putting women on the same level as children or invalids, such that men have to take responsibility for them and make their decisions on their behalf.

However, if I am to respect women enough to consider them equals to men in terms of personal sovereignty, then I cannot accept that there is any exploitation going on here. It’s a nonviolent and mutually voluntary** exchange of what one person considers valuable for what another person considers valuable, between people who are perfectly capable of making and being responsible for their own decisions.

One may consider pornography to be morally wrong, or argue that it has negative consequences, but that’s an entirely different discussion. I will add, however, that if one’s critical judgments against the viewing of pornography are justified, then they can be discussed honestly and frankly, on their own terms, without the need to use emotionally charged and rationally inapplicable labels like “exploitation.” Such an erroneous categorization weakens one’s argument, in that the natural conclusion is that if one must resort to manipulation, then the objection is likely motivated by personal factors, rather than any appeal to a greater morality.

Be careful how you use words.