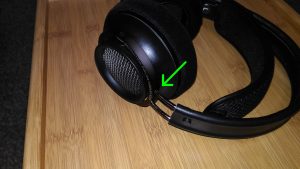 The the location of the wobble.

I acquired my Philips Fidelio X2HR headphones about two years ago and fell in love with the sound. They have not been entirely without problems, however. One of those problems is that the connection between the metal headband struts and the metal ring which supports the earcup became slightly wobbly over time. After living with it for awhile, I decided to just get down to it and fix it. After-the-fact, while trying out some Brainwavs earpads, I decided it might be a good idea to share the knowledge. 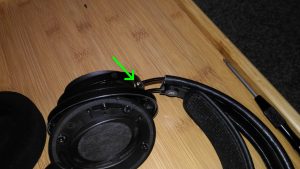 What we are trying to do is tighten two small screws that are visible, but practically inaccessible without removing the earcup from its frame. I had tried using the wrench directly, and later I tried securing the ring by cramming JB Weld into the tiny gap. Neither was successful, so I eventually had to take the headphones apart. I am not going to take my headphones entirely apart again, but I will use pictures and description to tell you what you need to know. 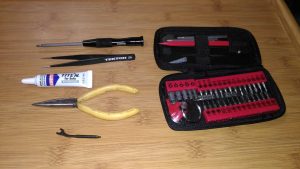 First, you will need the following tools:

The screwdriver and tweezers I used came from the Tekton 28301 bit set. I won’t be doing a review on it, but suffice it to say that I am very happy with the versatility, quality, price, and portability. 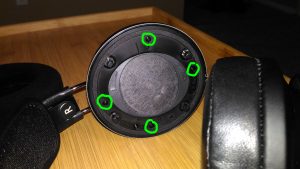 To disassemble the headphones to the point where you can tighten the screws, first you will need to remove the earpad. There are some X2 models manufactured by Gibson that had earpads which were glued down. I have never owned these, and can’t help with this. But for people who purchased X2s made by Woox, X2HRs, or X2s that were produced by Gibson after responding to complaints about the glue, all you have to do is grip the earpad evenly and firmly pull it straight out.

Now, you will see the driver in a housing that is secured with four screws. Remove these, and the housing should open up easily. 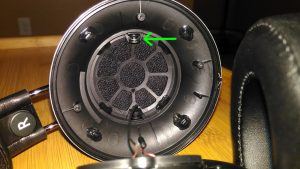 E-clip that secures a retaining/pivot pin

What we need to do next is remove two E-clips which secure the plastic pins that hold the earcup to the frame. However, the E-clips are glued in place with something that seems to me a bit like hot glue. This is where the tweezers come in. Pick out as much glue as you can. This is the most tedious part of the process. You will know you’ve gotten enough when you can rotate the E-clip so that the opening is away from you. At this point, use the needle nose pliers to firmly grip and remove the clip. 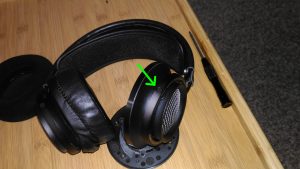 Once the clips are removed, you can push the plastic retaining pins out from the inside. One of them can be completely removed. The other one houses the wire that connects to the driver, and this one will not be entirely removable. It will, however, come out enough that you can remove the earcup from the frame.

Finally, you are able to access the screws that attach the ring. They both have a slot for a slotted screwdriver, however one of them has the wire passing through the center, and you will want to use the wrench to avoid damaging it. The screw without the wire can be removed completely. The screw with the wire may not be entirely removable unless you wish to pick the glue which binds the wire to the inside of the aluminum ring. I opted not to do this, and simply loosened it a bit.

Apply the Locktite to both screws, then tighten them into place. Reverse the steps of this guide to reassemble. I did not re-glue the E-clips, and have yet to have any problems. Repeat if you need to fix the other side.

Bonus tip: I have noticed that Fidelio X2s are very sensitive to positioning for accurate left/right balance. I have found that rubber O rings for quieting mechanical keyboards make excellent spacers for minor adjustments, to be placed on the pegs that hold the earpads in place.