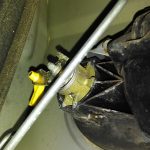 So, about a week ago, my car door lock stopped working from the outside. I’d insert the key and turn it, but it wouldn’t lock or unlock the car, and instead would turn a complete 180. After tearing apart my door and looking in there, it turns out that the operating rod had fallen off the end of the tumbler cylinder, and the clip that is supposed to hold it there had gone rogue.

Because I don’t like reinventing wheels, here’s a YouTube video on removing the door panel so you can access the back of the lock: How To Install Replace Remove Door Panel 00-05 Dodge Plymouth Neon 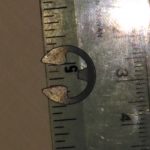 Trying to find the part I needed online or at the auto parts store was unfruitful. I eventually went to the Chrysler service center in my town, and the man who was there told me that it is sold as a part of the tumbler assembly, but I was in luck because he just happened to have one that he’d found yesterday while sorting parts. It is a small E-clip with a 3/16″ opening.

It is a rather standard part that you can find online or at hardware stores if you know what you’re looking for. However, if you don’t know, looking at manuals and schematics is unlikely to tell you. But, if you’ve found this blog, now you know.