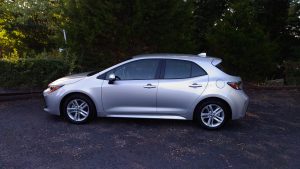 After about 12 years of driving my 2004 Dodge Neon, I finally retired it and got a new car. I wanted something reliable and versatile, with good gas mileage, upgraded specs, and some built-in tech for navigation and music. After comparing a number of makes and models online, and test driving a few in person, I finally settled on a 2019 Toyota Corolla Hatchback SE. I don’t intend to make a full review, as those are all over the internet already, but I thought I’d publish a few notes of my own firsthand experience as an owner – things that I haven’t seen others mention.