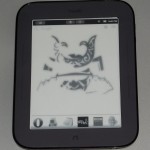 1.2.1 with wi-fi. Naturally, the first thing I want to do with it is make it do more than just read books. This means rooting the device, which is to bypass the manufacturer’s lockouts in order to access the underlying operating system. To do so, I followed the guides for NookManager and NTGAppsAttack, so that I could install apps from Google Market (Google Play for old versions of Android.) This guide also gave me some tips, solutions, and leads that helped me get my nook where I wanted it.

After rooting the nook, I also performed some battery-saving measures, which mostly involved removing applications that are not needed on the device, like phone services and media apps. I used this guide:

Given that this is my first time rooting – or even seriously interacting with an Android device, I don’t know how to use the Android development tools that some of these guides assume you’re familiar with. However, Android is just another Linux distro, and I know enough of the Linux command line to get by.

To make the necessary changes to my Nook, I installed the app “Rooted SSH/SFTP Daemon“, which allows me to SSH into my nook and run commands as with any Linux box. Once in the shell, it turns out that the /system directory, where most of the changes need to be made, is mounted read-only. I remedied this by using the “mount” command to find out what device was mounted on /system, and remount it with write permissions like so:

Once this is done, you can also use various utilities to make changes, or just do them in the shell like I did. For example, editing egl.cfg:

Don’t discard the backup that you were told to make in the guides! I recommend making an additional backup of your .apk files instead of deleting them, just in case you want to undo changes. There is enough room on the existing filesystem to do this comfortably.

I went a little further than the guides in clearing out my /system/app directory. Here is what I kept, and a short description of why, if I know what it does:

Other tweaks and gotchas

There were a few issues that I struggled with, so I’ll summarize some problems I had and how to fix them.

Other than the aforementioned, you may be interested in the apps I’m using at the moment to make my Nook look as it does. The first seven on this list you can see in this article’s photo. 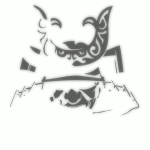 My Nook wallpaper, modified from cover art for The Tyrant’s Parable